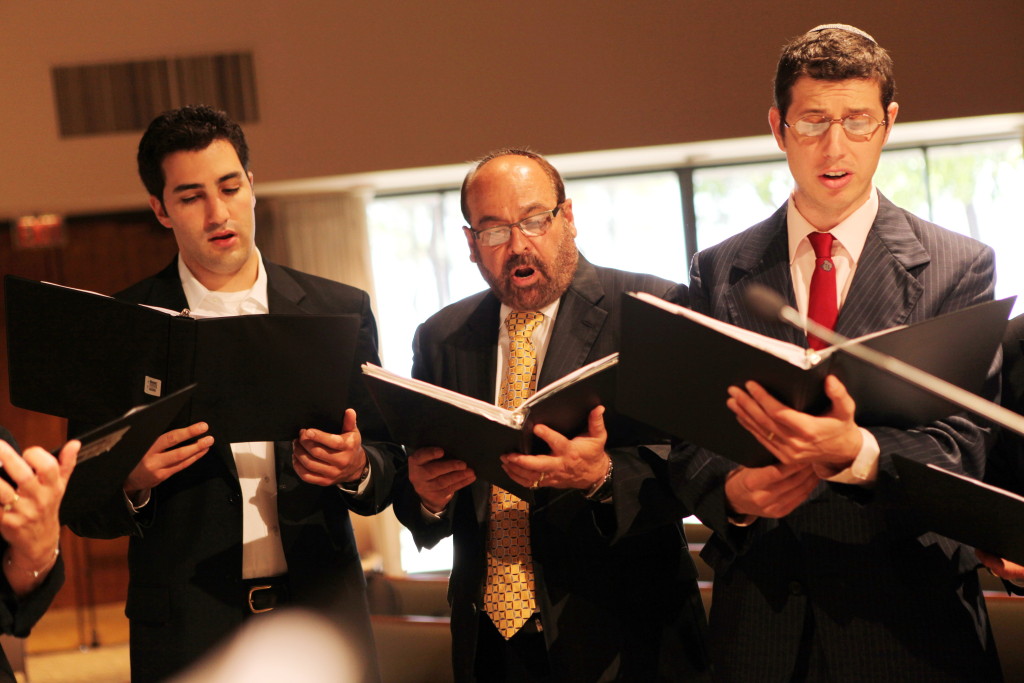 There is a general rule in synagogue music: the less frequent the holiday, the greater the desire to preserve its melodies. The High Holy Days have benefitted from this tendency. A handful of venerated Rosh Hashanah and Yom Kippur tunes are treated as if they came from Moses himself. These so-called “Mi-Sinai tunes” actually emerged in Rhineland communities of southwestern Germany and northeastern France between the eleventh and fifteenth centuries. They include the familiar strains of Kol Nidre, “The Great Aleinu,” the “Ma’ariv tune,” sections of the Amidah, various settings of Chatzi Kaddish, and others. Although these special melodies are sung at special times, their rich history and unique properties teach us about the wider significance of music in Jewish life.

It is not certain when Nigunei Mi-Sinai, “Tunes from Mount Sinai,” was first applied to motifs sung on the High Holy Days and portions of the Three Festivals. Some trace the term to Abraham Z. Idelsohn, the father of Jewish musicology, who used it in the early decades of the twentieth century.1 However, reference to “Sinaitic songs” appears in an 1894 essay by Naphtali Herz Imber, a poet most famous for scribing Hatikvah.² Whatever the case, the concept is indebted to medieval Rhineland sources, notably Sefer Chassidim by Judah ben Samuel of Regensburg (c. 1150-1217), and the writings of the Maharil of Mayence (Jacob ha-Levi ben Moshe Mollin, c. 1358-1427).³

To this day, Ashkenazi Jews everywhere are accustomed to these seasonal leitmotifs. They sonically embody heritage and continuity, with some kernels dating back perhaps a thousand years. They epitomize music’s ability to mark time, conjure memories, stir emotions, bolster identity, convey authenticity, and fortify communal bonds.

Mi-Sinai tunes are not tunes in the Western sense. They are not complete melodies—with beginnings, middles, and ends—and do not function as independent songs. Rather, they are tunes in the Eastern or “Oriental” sense: short pitch rows (motifs) that combine to form melodic passages. By one count there are thirty-nine individual Mi-Sinai tunes, which are weaved together in various ways to make different melodies.4

Because these motifs developed in the Rhineland, they have a distinctly Central European sound. Yet, they are utilized in a characteristically Eastern fashion. This fusion of East and West is a testament to the longevity of the tunes. Their emergence coincided with a significant northward migration of Jews from southern Europe—a population that itself had ancestral roots in the Levant. Thus, while the Mi-Sinai tunes absorbed a Germanic flavor, their essence belonged to the East. In this fascinating way, these tunes celebrate the Jewish people’s unique place in history as a vital cultural bridge between the Near East and Europe.

3. No Two Versions of Kol Nidre are Identical

Kol Nidre is perhaps the most recognizable synagogue melody. Its lilting phrases, dramatic melismata, and haunting cadences encapsulate the feelings and themes of Yom Kippur. The opening measures are enough to signal the solemn atmosphere of the holy day. It is therefore surprising that no two renditions are exactly the same. Even the familiar opening motif exists in multiple variations, united by a basic skeleton of the octave, seventh, and fifth of the harmonic minor scale. Roughly a dozen additional motifs are stitched together as the chant unfolds. Neither their shape nor their sequence is duplicated in the hundreds of published settings.

The oldest extant manuscript comes from Cantor Aharon Beer of Berlin, c. 1765. It is highly embellished with passages reminiscent of Haydn. Choirmaster Louis Lewandowski, also of Berlin, published a more refined version for cantor, mixed chorus, and organ in 1865. Lewandowski’s chant patterns were taken (without credit) from his cantor, Abraham Jacob Lichtenstein, who also taught them to Max Bruch, a non-Jewish composer whose famous 1881 piece for cello and orchestra introduces other invented and folk-style passages. It doesn’t take more than a few examples to see the almost limitless possibilities, or to imagine how fluidly the motifs were sung in earlier oral traditions. Kol Nidre shows that even the most cherished rituals have room for improvisation.

4. Everything is (Potentially) Sacred

Despite their elevated status, the material from which these tunes derive is conspicuously pedestrian . They comprise a raw mix of German minnesinger ballads, French troubadour melodies, and Rhineland street songs, along with some cantillation neumes, which themselves bear the imprint of Central European folksong. (This is most apparent in the rendering “fanfare” markings, such as telisha geloda, pazer, and shalshelet.)

Borrowing and repurposing is by no means unique to Mi-Sinai tunes. Every Jewish melody, old and new, exhibits some influence from “host” or neighboring populations. In oral musical cultures especially, where sonic borders tend to be porous, melodies float on the air and filter into churches, synagogues, dance halls, and village squares. This is how regional music becomes “regional.” In the Rhineland, “outsider” sounds gradually shed their secular connotations and took on a Jewish life their own, grafting onto specific texts and consolidating into a hallowed mainstream. Eventually, they were heard as quintessentially “Jewish,” and nobody scoffed when they were sentimentally linked to the Sinai revelation.

5. The Original Texts Have Been Lost

Mi-Sinai tunes are sung exclusively during the High Holy Day and Festivals. However, they filtered into the synagogue very slowly. According to musicologist Eric Werner, the now-ubiquitous tunes were first set to poetic responses to calamities that befell Jews of Germany and France in the Middle Ages — a period marred by Crusades, pogroms, ghettoization, and concomitant devastations.5 Two kinds of poetry arose in that desperate milieu: laments of martyrdom, and hymns to God’s unity and glory. They were songs of communal reassurance, offering hope against hope.

By the middle of the fourteenth century, around the time of the Black Death, over two hundred Jewish communities had fled the Rhineland for Poland, Russia, and the Balkans. The old poetic texts were forgotten, but the tunes were absorbed into the tapestry of liturgical song. Although the Rhineland poems have disappeared, some of their original spirit lives on. The melodies remain a powerful force for unity and uplift and are a reminder of our history of reinvention.

Cantor Jonathan L. Friedmann, PhD is a Professor of  Jewish Music History at AJRCA, and Community Leader and Education Director at Adat Chaverim—Congregation for Humanistic Judaism in Los Angeles. Dr. Friedmann’s blog, ThinkingOnMusic, and his website explore music as a vital aspect of the human experience.