For centuries, Sephardic-Mizrahi Jews of Arab lands lived in relatively peaceful coexistence with their Arab-Muslim neighbors. While never perfect, life for Jews in Arab lands was not characterized by the horrible persecutions, pogroms or expulsions regularly experienced by Jews living under Christian rule in Europe. Indeed, the Golden Age of Spain took place under Islamic rule, and only after the Catholics re-conquered Spain from the Muslims were Jews subject to the brutal inquisition and subsequent expulsion from Spain in 1492.

This relatively calm and peaceful coexistence is a far cry from the state of war between Arabs and Jews in the modern Middle East. Historians attribute this change to various political factors, but many — especially today — blame religion as a major stumbling block toward recapturing peace between the two peoples.

But can the voice of religion bring about a positive change? Rav Bension Meir Hai Uziel believed it could.

Born in Jerusalem in 1880 under Ottoman rule, Rav Uziel became the Sephardic Chief Rabbi of Jaffa in 1911, and was later the Sephardic Chief Rabbi of British Mandatory Palestine (1939-1948) and then of the State of Israel (1948 until his death in 1953). As a leader through three administrations in the land of Israel, throughout his career — no matter who ruled the land — he sought peace and reconciliation with his Arab neighbors.

A deep believer in the power of religion to foster positive and peaceful relations, Rav Uziel issued a direct message to the Arabs following the United Nation Partition Plan in November 1947:

“To the heads of the Islamic Religion in the Land of Israel and throughout the Arab lands near and far, Shalom U’vrakha. Brothers, at this hour, as the Jewish people have returned to its land and state … we approach you in peace and brotherhood, in the name of God’s Torah and the Holy Scriptures, and we say to you: please remember the peaceful and friendly relations that existed between us when we lived together in Arab lands and under Islamic Rulers during the Golden Age, when together we developed brilliant intellectual insights of wisdom and science for all of humanity’s benefit. We were brothers, and we shall once again be brothers, working together in cordial and neighborly relations in this Holy Land.”

Rav Uziel sought to re-create the atmosphere once lived by his Sephardic-Mizrahi ancestors, and he felt that the true message of peace was deeply embedded in religious texts, especially the Passover story, through which he declared his most powerful expression for peace with the Arabs. In April 1948, on the last Passover before Israel declared her independence, Rav Uziel issued a stirring message of peace rooted in the Passover narrative:

“It is not by sword nor by war do we return to our ancestral homeland, as we do not desire war, bloodshed or loss of life. Our sages expressed a deep Jewish value by refraining from reciting the full Hallel (Psalms of Praise) on the seventh day of Passover, for on that day, the Egyptians drowned in the sea, and God declared: ‘My beings are drowning in the sea and you sing Hallel?’”

“Indeed, Passover teaches us to love all those around us, including our declared enemies, as it is written: ‘You shall not abhor an Egyptian, for you were a stranger in his land’ (Deuteronomy 23:8). This means that we do not bear any vengeful grudge toward Egypt or the Egyptians for the suffering and enslavement we endured in their land, rather we only remember that we were strangers in Egypt. We forget all negativity and recall only whatever positive treatment they gave us.”

In a poetic metaphor on Jews having been strangers and slaves in Egypt, Rav Uziel wrote:

“We once again reach out to our Arab neighbors in peace, for our sole desire is to live together with you in this Holy Land that is sacred to all nations. Let us engage together in fruitful labor for the sake of peace for all inhabitants of this land. Let us work together, using all of our diversity in religion, beliefs, customs and languages, so that we can build and assure absolute freedom and equality for all inhabitants in this land. Let us together recognize that only God is the ultimate ruler over the earth, for we are all ‘strangers in God’s world.’”

As a rabbi who “loved peace and pursued peace,” and as a Sephardic Chief Rabbi who boldly used his position and ancestry as a medium to seek peace, Rav Uziel never stopped talking or dreaming about peace between Jews and Arabs. 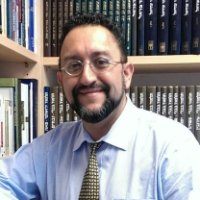 Rabbi Daniel Bouskila is Director of the Sephardic Educational Center in Jerusalem and is Professor of Rabbinics at AJRCA.