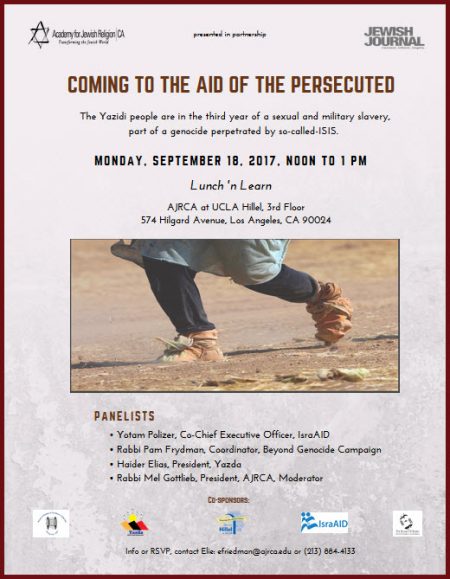 The Yazidi people are in the third year of a sexual and military slavery that is part of a genocide perpetrated by so-called-ISIS. Among other groups, the Israeli NGO IsraAid and the Yazidi NGO Yazda work hard to raise consciousness and provide for Yazidi rescue and relief.

Join us for a panel discussion featuring a number of prominent voices in this discussion:
Yotam Polizer, Co-Executive Director of IsraAID,
Rabbi Pam Frydman, Coordinator of the Beyond Genocide Campaign,
Haider Elias, Director of Yazda and,
AJRCA’s own Rabbi Mel Gottlieb

This event has passed. To watch a recording, please click below:

To see the full-size flyer image above, click here.