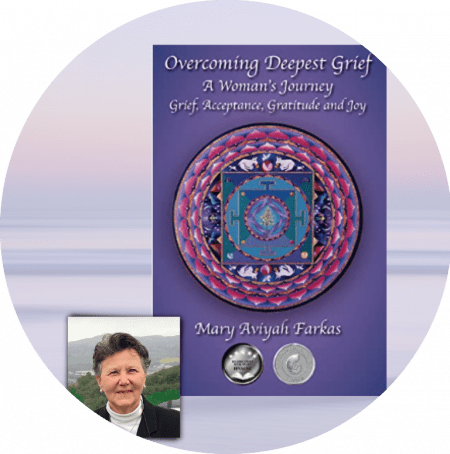 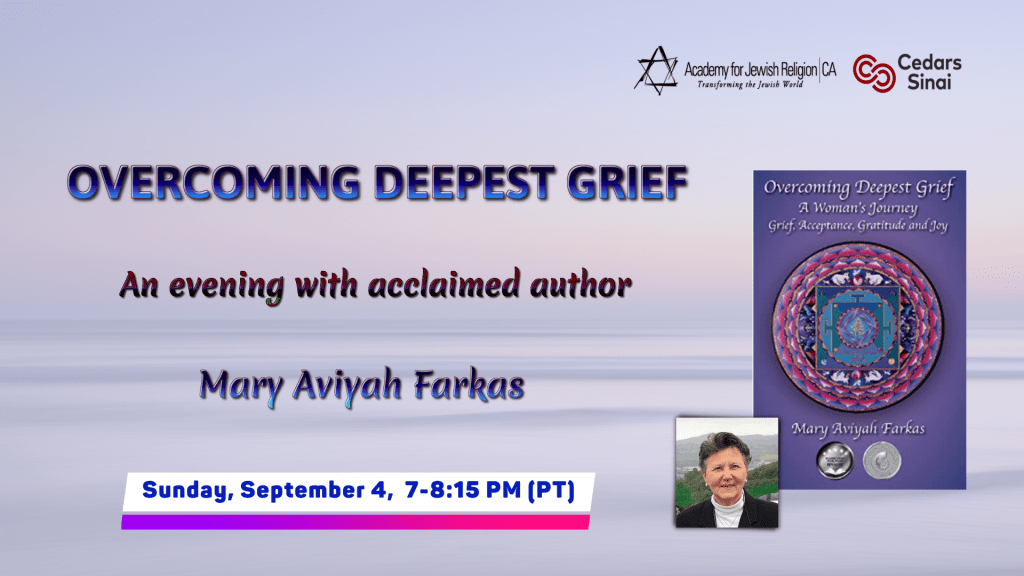 Join us virtually on Sunday, September 4th at 7:00pm PT for an an evening with acclaimed author Mary Aviyah Farkas, as she discusses her book “Overcoming Deepest Grief: A Woman’s Journey, Grief, Acceptance, Gratitude and Joy.”

This seminar, held via Zoom, is presented in collaboration with Cedars-Sinai Medical Center’s Spiritual Department.

In order to fully engage in the event, we encourage you to purchase and read her book prior to attending.

The virtual event is free and open to all, but you must register to attend. Please click here to register.

Our Speaker
Mary Aviyah Farkas has spent the past 30 years teaching others to care for themselves; inspiring others to create major life transformations. Along the way, she learned at a very deep level how to care for herself.

She learned to fully love and accept herself exactly as she is. “I love and accept myself exactly as I am.” This powerful affirmation resonates in Mary’s heart, right next to her daily prayer: “Dearest God, Help Me To Realize That Loving You Is The Most Important Thing In My Life.” She has been aware of loving and trusting the existence of her beneficent Creator since the age of eight. She fully understands that most people are blocked from seeing their own beauty, their own goodness, and thus create blocks which cause them to dishonor themselves and others.

Mary was born in Manhattan, 1948. She grew up in a traditional Hungarian home, her parents newly arrived to the United States from war shattered Budapest, her father a Jewish Holocaust survivor. Her family moved to California’s San Fernando Valley when she turned 14, and after the death of John F. Kennedy, she became politically active in the Young Democrats. At 25, she moved to Cambridge, Massachusetts and quickly became part and parcel of the fabric and lore of the 1970’s early Lesbian Feminist and early Food Co-op movement. In the late 1970’s, Mary met her first Life Teacher, Sant Ajaib Singh Ji from whom she received initiation into the sacred gift of Naam. She traveled five times to India to sit at his feet.  Her second Life Teacher is Rabbi Gershon Winkler a Kabbalistic/Shamanic Rabbi who has taught her to revel in the Total Joy of All of God’s Creation.  In 2010 Mary sought conversion to Judaism, and in May 2011 this conversion to the Faith of her father’s family was complete.  Her Hebrew name is Aviyah.  Both of her Spiritual Masters remind her to always Trust, and to look for the spark of Love and Goodness in All.

In her 20’s she fell in love with the study of Nutrition; the all encompassing nature of the topic, the easy blend with the things that intrigued her as an undergraduate, and still do: anthropology, geography, politics, understanding people and how they function, how the world functions. She obtained her Masters in Science, Nutrition from Tufts University.

In 1985 she moved to Mendocino County where she worked and thrived as a Registered Dietitian. She understood that the only true way she could help people change was to help people change their beliefs; change the beliefs which lock them into destructive patterns. Thus she returned to school to obtain her second Masters degree, in Counseling Psychology, from the University of San Francisco.In January, 2006, Mary’s soul mate of eighteen years suddenly and unexpectedly, died; this was just six months after Mary had lost her dearest sister to cancer. She now felt totally shattered and lost. This led to her move to southern California where she now resides, near to her very dear, close family. Mary spent the years 2006 to 2009 healing from the shock of these losses, the most significant losses of her life.

In early 2009, Mary created eldermuse.net as a portal to inspire others as they age and face life’s tragedies.  She has learned to be fearless and to love life from her Spiritual Masters, the Ethos of Judaism, her parents, family and friends.  She cares passionately about the state of the world, the equality of women, and fervently believes that we are all One…..Namaste.