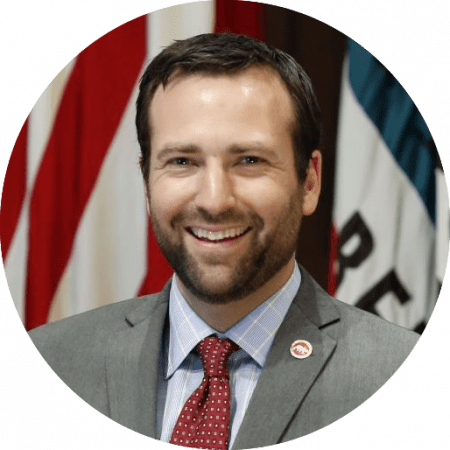 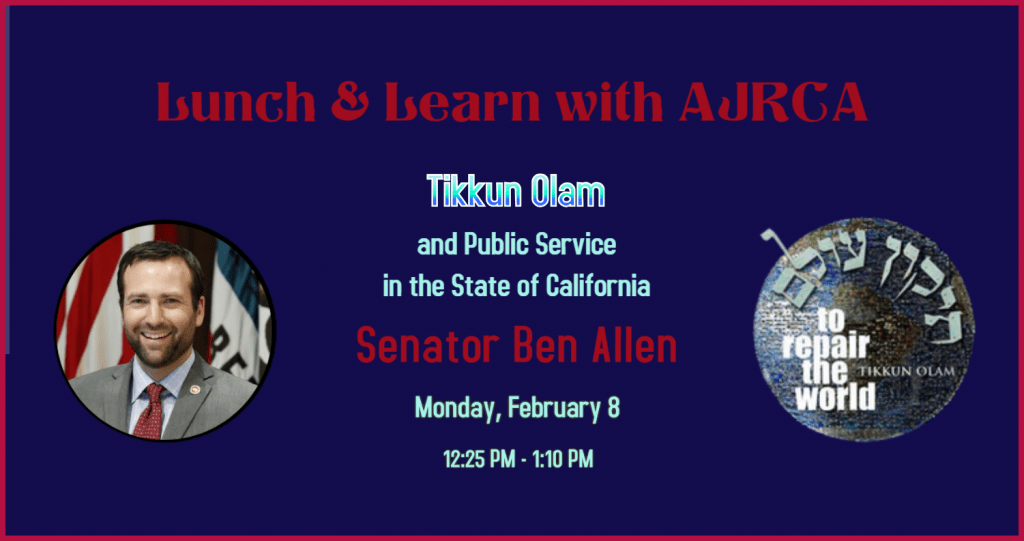 Join us on Monday, February 8th at 12:25pm PT for “Tikkun Olam and Public Service in the State of California” with Senator Ben Allen.

During this event, Senator Allen will speak about his background, rise through politics, and how his faith has impacted his values, principles, and public service.

Our Speaker
California State Senator Ben Allen was elected in 2014 (and re-elected in 2018) to represent the 26th Senate District covering the Westside, Hollywood and coastal South Bay communities of Los Angeles County.

Ben has thrown himself into the important work of state government, focusing on wise decision-making and pushing for reforms that address systemic inadequacies in our state. He has authored important laws in a variety of areas, from
environmental protection to electoral reform.

Prior to being elected to the Senate, Ben was a school board member, attorney and lecturer at UCLA’s law school. As president of the Santa Monica-Malibu Unified School District Board of Education, he spearheaded efforts in environmental sustainability, financial accountability, and community engagement. Before his election to the SMMUSD Board, Ben served as a voting member of the University Of California Board Of Regents and was a judicial clerk with the United Nations International Criminal Tribunal for Rwanda.

Ben grew up in the 26th Senate District and attended public schools, graduating from Santa Monica High School in 1996. His father, Michael, spent his career on the English Department faculty at UCLA and mother, Elena, was a public school
teacher and artist, and served as Chair of the Santa Monica Arts Commission. Ben has a Bachelor of Arts degree magna cum laude in History from Harvard University; a Master’s degree in Latin American Studies from the University of
Cambridge; and a Juris Doctor degree from UC Berkeley. Fluent in Spanish, Ben is a Senior Fellow with the international human rights organization Humanity in Action, an Aspen Institute-Rodel Fellow, a Truman National Security Project
Fellow, and a graduate of the Jewish Federation’s New Leaders Project. He and his wife Melanie, an attorney, have a little son, Ezra.